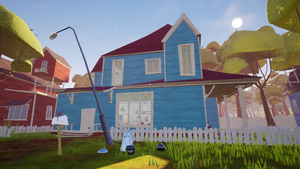 Nicky Roth's house as it appears in the final build.

Nicky Roth's House is located in Raven Brooks, and it is where the protagonist lives in Hello Neighbor. It provides Nicky with a safe area where Mr. Peterson will not bother him (save for the Pre-alpha and first Alpha, where bugs make this possible).

The house contains two bedrooms, a living room, a kitchen and a bathroom.

The house is a rather well-sized blue house with a red roof, chimney and white doors, one of which being the front door. There are various windows, including a small square one that, when broken, allows access to the roof. There is a mailbox and a leaning street lamp at the front of the house, along with a small white picket fence which runs around the house, and a couple of the sections have taller fencing instead. A bike, bench and circuit breaker can be seen on the right side of the house. There is also a trash can and some trash bags at the front.

The living room is the room at the front of the house, and is its largest room. The living room has a three-paned window overlooking the street, two ceiling lamps, three sets of orange shelves on the walls, a set of purple shelves on the back wall, a blue and brown shelf unit near the front door, and various paintings all over the walls. It also contains a green and orange sofa, a brown coffee table, two brown wardrobes, and a set of stairs leading up to the bedrooms, as well as a yellow and white wall-mounted lamp in front of the stairs and a storage cupboard under the stairs. There is a green footstool and a floor lamp near the sofa, and two cabinets, one containing a TV and blue vase, the other containing a large red radio and a blue telephone. The cabinets have a set of three drawers, as well as a sliding door which can cover either a large compartment, or two small compartments separated by a shelf. A large triangular clock can be seen above the archway leading to the kitchen, and each set of wall shelves has a handful of books. A small four-colored rug is in front of the front door and a large blue and yellow one is roughly in the center of the room. The coffee table and footstool are on this rug. The light switch is to the left of the front door, and controls the ceiling lamps and the wall-mounted lamp.

The storage cupboard is a small space under the stairs, and it holds a wall-mounted fluorescent lamp, two large open cardboard boxes and three regular cardboard boxes.

The kitchen can be seen straight across from the front door. It has a single ceiling lamp and a three-paned window with a view of a large portion of Raven Brooks. There is a rounded orange wooden table in the center of the room, surrounded by four yellow and blue wooden chairs. The table has a metallic rim, and has a single thick leg with four metallic feet, and there are two plates on top of it. The table and chairs are on top of a large wavy blue rug. A radiator, three cupboards and a useable sink with a large metallic faucet can be seen at the back of the room, with an oval mug painting above the sink, and a set of shelves with a stack of three plates which is above both a flourescent lamp and the leftmost cupboard, which also has some plates. The rightmost cupboard only has a blue vase. The left and right cupboards have a single door, and the sink unit has two doors. On the floor to the left of the cupboards is a trash bag, a banana peel and an apple core. The door to the bathroom can be seen near the radiator. Opposite of the sink is a large two-doored cabinet and a brown shelf with three plates on display and a rectangular flower painting above it, and on the same side of the wall is a light switch which controls the ceiling light. On the left side of the room is two sets of cupboards and a wall-mounted cupboard, a long blue oven with a grill on top, and a same-colored cooling unit above it. The leftmost cupboard, nearest to the living room, has a single door, and has a set of blue shelves and a fluorescent lamp above it. On top of the cupboard are two bananas, a carton of milk and an angular red mug. The grill holds a pan of fried eggs and a blue polka-dotted kettle. The right-most shelf, nearest the window, has another fluorescent lamp above it, and holds a wooden chopping board, a yellow toaster, a brown paper bag and an angular green mug. The right cupboard also has a door with a large compartment, and two uncovered small compartments separated by a shelf. The wall-mounted cupboard has two compartments, one of which is covered by an orange door, and the other being split into two with a shelf. All the cupboards are blue and orange, with white interiors. The second light switch, located above the left-most cupboard, controls the fluorescent lamps. A purple fridge-freezer with three doors is also present here, and can be used in the third Act to freeze the globe.

The bathroom is fairly large and has a single ceiling light and a small window that is fairly difficult to see out of, due to its height. There is also a light switch to the left of the door. On the left side of the room are a two-doored standing cabinet, a bathtub with metallic shower, a bucket, a broom, a set of orange-brown shelves on the wall and a four-colored rug on the floor. The center of the back wall has a radiator. The right side of the room has a toilet with blue shelves above it, and a sink identical to the one in the kitchen, with a wall-mounted cupboard above it. The sink and shower can be turned on, should the player need water to cool something down.

The stairs have two broken posts, with another yellow wall-mounted lamp above it, and at the top is a single ceiling light, and a light switch which controls the nearby wall-mounted light and ceiling light. Opposite the stairs is a single-paned window. At the top of the stairs, there is also a set of orange-brown shelves with some books on it, and to the left is a smaller room containing a radiator, another wall-mounted light and switch, and the doors leading to both bedrooms.

Nicky's bedroom is fairly small, and contains a single ceiling light, a switch to the left of the door, and a brown wooden bed with a beige and brown plaid duvet and white sheet. The left side of the room also has a single-paned window behind the bed, as well as a small red table, a brown and red chair near the table, a set of shelves with some books, and a Mii poster with the words "The Family" on it. This is notably the only text in the game that isn't scrambled. The right side of the room has another four-colored rug, another green footstool, a radiator and a large shelf unit with a lot of books on it.

Mr. and Mrs. Roth's bedroom is fairly large and oddly shaped, with a small section at the far right containing a wooden bench and a small rectangular window. The main section has a ceiling light. It also has a radiator, and a bed identical to Nicky's but with two white pillows on it, and three paintings are above it. On the left side of the room is a wall-mounted lamp, a set of shelves, a red table with three books on it and two brown and red chairs, as well as a painting above the table, and a large square window. On the right of the room is a single-paned window with a small yellow table in front of it, which has a soda can on top. There is also another wall-mounted lamp near the aforementioned smaller section, and a set of shelves with some books on it.

At the beginning of Act 3, Nicky's house is dilapidated and run-down with age, with the woodwork being heavily worn and boards covering all the windows. The front door is also locked with a blue padlock, and the key can be found in the boot of Nicky's car. A wardrobe and covered object make a barricade blocking the stairs. A pile of boxes is in the living room, along with a BIJUUM can, three wooden crates and a childhood photo of Nicky, along with a few other boxes. Many of the loose objects are absent, the phone is now shifted near the covered sofa and will ring upon entering the house, and one of the shelves has broken off the wall and crashed to the floor. The storage cupboard is empty. The kitchen contains only the ceiling light, radiator and a single empty shelf, with two wooden crates on the floor. The bathroom contains only the bathtub, toilet and ceiling light, and the small window is slightly different and is also boarded up. The stair railing can be jumped over from the sofa, where the player will find that the upstairs is empty, save for a QR code and text render error in Mr. and Mrs. Roth's bedroom. Both bedrooms also lack a ceiling light, having only the cable. 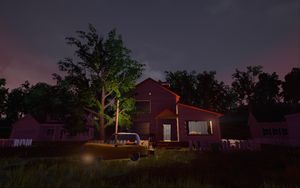 The protagonist's house was a somewhat small white house. It had two rooms; a bedroom and a foyer. The bedroom contained only a bed, window, ceiling light and light switch, whereas the foyer also contained its own light and switch. However, the other front window showed a large L-shaped room that couldn't be accessed, though glitches allowed the protagonist to place objects there, where only carefully leaning into the wall could allow them to be retrieved. The furniture was in a pile outside the house, with a kettle and toaster on top of the protagonist's car.

The player's house remains mostly unchanged, save for some minor alterations such as having a different wallpaper in the "hallway", a power box (which is part of a tutorial), a dresser, and a telephone. 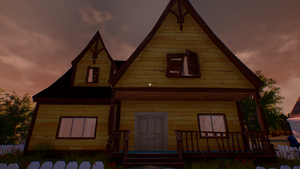 The protagonist moves into a white and blue house. Here, a hallway, living room, closet, kitchen, and a bathroom are present. The rest being blocked off by more furniture (at the start). After taking a nap the neighbor kicks the protagonist out and forces him to live in the big yellow house across the street. This is the protagonist's actual house, as seen in the debug mode (enabled by pressing the " key) in which it says, "Player's house floor 6". The house is much bigger than the one in the previous builds. It features a hallway complete with a coat-hanger, a living room with a dresser and the telephone (and for some reason a sink). A jammed door upstairs, a bathroom with a bathtub and a toilet, and an empty room were also present in this house.

The player's house used the same design from Alpha 2, but with more furniture added, like a bed, couch, and chair.

The player's house was a very small white house, and was merely a prop in this build. A phone was on the right outside wall. According to the ending, the protagonist had to move into the suburbs after being evicted.

The protagonist's house went back to being accessible after Alpha 4. Its interior was mostly identical to that of the apartment in the intro, save for an additional, unfurnished room likely meant for a bathroom.

More objects were added and the bathroom was expanded. It was otherwise identical to its previous incarnation.