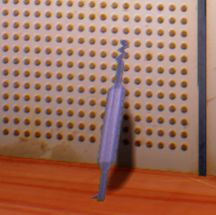 Lockpick in the Alpha 2 Tool Room

The Lockpick is an item that originally appeared in the Pre-Alpha of Hello Neighbor. It returned in the final game, in which it is a key item in the first act and an optional item in the third act.

The Lockpick is an item which appears in the first and third acts of the game. It is essential in opening the tool room during the first act, and is a hidden item during the third act in which it can act as a replacement for one of the keys. The player needs to click on a lock to use it and upon use, it will disappear.

In the first act of the game, the lockpick can be found in the tool room, and requires the magnet gun in order to be retrieved. In the third act, it is instead hidden behind the Neighbor's house and outside of the fence. The player needs to find the hidden graveyard teleport to escape the normal playing area and look around behind the fence.

In the Pre-Alpha and Alpha 1, the lockpick appeared as an alternative to the key, and was necessary for opening the basement door. In the Pre-Alpha, it could be found either in a drawer in the sitting room, or in the garage. In Alpha 1, it was found in the CCTV room. In Alpha 2, it instead opened the Neighbor's shed and allowed access to a wrench and the rifle. It could be found in the tool room and in the Kitchen. Its functionality in opening the basement was replaced with that of the keycard in future versions.