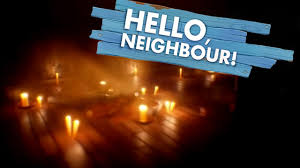 "The dark secret of the neighbor is revealed."

The basement is the largest part of the house, this is the location the Neighbor attempts to keep the player from entering.

In the Pre-Alpha, the basement door was a white wooden door blocked with a wooden board, and sealed with a padlock and number keypad. In Alpha 1, there was no keypad, and there were two wooden boards instead of just one. Additionally, the player had to remove the individual nails instead of just clicking the boards. This method would become the default for future versions. In Alpha 2, the basement door looked like a large metal door that could be opened with a valve, and was blocked with only one wooden board, but had a key-card reader in place of a number pad. In its current appearance, the basement door is a brown wooden door, which is keycard-controlled, nailed with two boards, and as of the first Beta, propped shut with a chair. The chair can simply be removed, but the keycard is frozen in a block of ice inside the Neighbor's freezer, and the crowbar is hidden somewhere on the third floor and heated with electricity.

In the full game, the basement appears to be an ordinary room at the bottom of the stairs, containing boxes, a boiler and a washing machine. However, upon trying to open the washing machine, the entire front hinges open, revealing itself to be a secret door. It contains a secret passageway leading to the real basement; a maze of rooms. The player must get to the end of the basement, and make their way back to the beginning while removing the chairs blocking all the doors. This will create a path for them to follow, and they must then turn off the power. Upon doing so, numerous gates appear and block the player's path, requiring them to use the doors. The Neighbor will also enter the basement. The player must make their way to the end, while avoiding the Neighbor. However, for whatever reason, he cannot catch them, should they leave the washing machine. The player must turn on a generator and then make their way back to the exit door, flipping the switch to remove the gate blocking the door. Upon entering, the Neighbor enters behind them and begins chasing them. The player must make their way to the end of this passageway without being caught. If the Neighbor catches them here, the player is simply put back at the beginning of the passageway and must repeat the chase. At the end of the passageway is a door locked with a few padlocks. The player fails to open the door and is then captured by the Neighbor.

In Act 2, the player wakes up in a small locked room within the basement. Upon attempting to open the door and then wandering away from it, construction noises are heard, and then the sound of a lock being opened. The player can then exit the room to find the basement's layout is slightly different, and only a small section leading to the back exit is accessible. There are wire fences with a boiler, bed, and other bits of furniture behind them. The main path back to the front of the basement is blocked with a pile of furniture, so the player must remove a nearby vent cover, crawl through the duct and climb the ladder to exit.

In Act 3, the layout of the basement is much of the same, but the accessible areas are different. The basement is also tilted and worn down. All three abilities are required from here on. A Shadow Man is also present, and again requires invisibility to avoid being caught as it walks down a long hall. After it is gone, the player can pass. They should then go down the hall the Shadow Man came from and double-jump onto some pipes to get over a gate blocking the door marked with an Exit sign. At this point, the Neighbor catches the player. Use the break-free ability by repeatedly jumping (Spacebar by default) to escape. Afterward, the protagonist knocks over the Neighbor and locks the door behind them. The Neighbor can be heard crying worriedly from outside. The player can then go to the door that was previously locked in Act 1. The Giant Neighbor boss battle begins after going through it.

The player never got to see inside the Pre-Alpha and Alpha 1 basement(s), as it was simply a cupboard under the stairs in the former, and a cut-scene played in the latter where the Neighbor shut the door on the protagonist and buried them alive.

In Alpha 2, the basement was developed and had several rooms. However, the game ended as the player approached the open wooden door, and this version of the basement would not be playable in future versions. Additionally, the basement itself was not in Alpha 3, and the rooms are thus unused.

From Alpha 4 to Beta 3, the basement was a strange place, with a huge abyss, platforms, and large fans which required the player to double-jump to reach them and be holding an umbrella in order to catch the wind.

The player went through an assortment of rooms. Firstly, they would drop into a small room with lots of cameras dangling on wires from the ceiling, and switch on a generator in order to open the gate. The Neighbor himself appeared in order to chase the player, though he could only do so up to a certain point. The player must use their break-free and superthrow abilities to knock down the Neighbor and allow enough time for the gate to open. They must then run to the next section, double-jumping twice in order to get over a barricade of furniture. Be warned that not being fast enough will allow the Neighbor to climb over the barricade and continue giving chase, though going invisible allows for losing him once past the barricade. The next obstacle requires double-jumping up a few platforms to turn on a generator, and then use the super-throw to hit the giant switch with one of the nearby objects, and then return through the gate to double jump into the fan. At the final section, a Shadow Man lurked, making strange wailing noises. If it spotted the player, it would warp in front of them while growling, sending them back to the start of the basement. The player was required to utilize invisibility and wait for it to pass, in order to safely reach the final boss.